Glenn Fisher, author of the brilliant book, The Art of the Click... do you have any strange writing rituals you’d…

Glenn Fisher, thank you so much for agreeing to be a part of The Writing Desk Blog.

Now, imagine I’m about to introduce you to an auditorium, filled with the smiling faces of folks fuelled by caffeine and an eagerness to learn. What would I say

Glenn Fisher. An author, speaker and specialist in direct-response copywriting.

Can you name the business book that’s always on your desk? (I’m talking about the one that’s covered in pencil marks, coffee stains and has turned down corners…)

I think I most often refer back to Scientific Advertising by Claude Hopkins. But it’s a tough call between that and about ten others. I read a lot.

I love the Wilkins Coffee adverts Jim Henson did before the Muppets. They were done in 1957 but are fresher and funnier than most TV advertising today. You can find them on YouTube.

“Everyone has a book in them…” Or so the saying goes. What do you think/know/believe is the secret to good writing?

Only write when you know what you’d like to say.

If you were just starting out, what advice would you give yourself? Which book or books would you read first?

I think I was lucky to follow a pretty good path that served me well. But I’d probably have told myself to show more people your copy sooner before sending it out. And listen to feedback more.

Silence? Radio? Or music while you work?

Silence, usually. Aside from my dog Pablo trotting around, ripping soft toys apart and occasionally barking at nothing.

What are your top three novels of all time – and why?

The New York Trilogy, by Paul Auster, because I’d never read anything before it that had such a visceral effect.

The Goldfinch, by Donna Tartt, because it’s an amazing example of how you can write about something without writing about it.

And The Book of Laughter and Forgetting, by Millan Kundera, because of the way the author is so present and self-aware of his influence on the writing

What’s the best thing you’ve ever written? Why did it rock your world?

Copy-wise, probably it was the first letter I wrote that made a million pounds as I never really imagined doing that was possible.

But as a general ‘writer’, I wrote a short story very early on in my writing life about a fictional street crossing championship I’d invented. It sticks in my mind as one of the first times I wrote something original and realised I might be half decent at this whole writing thing.

What’s the last thing you bought? And yes, that packet of chewing gum counts.

Loads of beige buffet food, some party hats and a cheeky monkey chocolate cake. It’s Pablo’s first birthday today so we’re having family round for tea.

Who was your teenage crush?

I think probably Dana Scully from The X Files. I was a geek.

Can you describe the best meal you’ve ever eaten?

Ruth’s Sunday dinners have to be up there. And there’s the lamb chops and potatoes I once ate on a holiday to Zykanthos with two friends. That meal has taken on a life of its own. It’s like a myth now. Was it even that good? Nobody knows.

What’s your favourite tipple? Is it wine, beer – a cask-aged malt?

A cold beer. Something quite hoppy.

If I were to give you a private jet, David Attenborough as a tour guide and a month off work – all expenses paid – where would you go and what or who would you write about – and why?

There are so many places I’d love to visit. We’re hoping to go to Japan next year. But I’ll say Russia. I think that would be interesting to write about purely as a travelogue, recording your general experiences.

What’s in your pockets?

Left pocket is my wallet containing my bankcards, a Screwfix loyalty card (I’ve shopped there once?) and a little painting Ruth made for me of a chicken on a Battenberg background. No cash. A plectrum. One misshapen business card. Some receipts.

Right pocket is my iPhone – keeping me a slave to the grind.

Back pocket there’s a doggie bag for picking up you know what.

Pen and ink, pencil and paper or keyboard and screen? What’s your writing style?

Apple Mac and hands. I write, delete, repeat. Until it sounds right. Then I move on to the next bit and repeat the process. Over and over this happens. And I always start from the very beginning each time I review a section to make sure it all flows as one.

Do you read any blogs or magazines about writing? (And I mean read, not just subscribe to and delete/leave on desk and recycle?)

I’m ashamed to say not a lot. I dabble in most but I’m still searching for that one blog I keep going back to. I used to always follow Glove and Boots but they don’t publish so much these days.

But I must say there are some excellent posts out there, which I’ll share on Twitter whenever I can.

Tea – or coffee? What’s your poison?

Coffee before 8.30am. Earl Grey all day after, and perhaps too regularly.

Do you have a favourite cup or mug? Can you describe it?

Yes. It’s an oversized white mug I got from the Tate Modern and has a David Shrigley painting on called ‘Museums are full of crap’.

What was your most adored children’s book? And character?

I liked Miffy. And Spot the dog was a firm favourite. Also Tigger.

Right now it’s ‘Beezey’, which is an invented word in our household. It can mean almost anything and be used as a noun, verb or adjective.

Your most loathed word? (You know, the one that makes you shudder and say “Ew!”?

Where can we find you? – Browsing online or lost in the aisles of a bookstore?

Favourite song lyric of all time? And why?

Name the artist who is guaranteed to get you up on the dance floor.

I have a bath before most writing sessions. It’s called a thinking bath. I do a lot of my thinking in the bath.

What are you working on today? What’s in the pipeline?

A guest blog about why I hate writing. This interview. Legal changes to a long copy sales letter I’ve written for the US. And I need to sort out stuff for Pablo’s party, which will be more stressful than it should be.

In the pipeline I have a new podcast series I need to sort and I’m starting on the ideas stage for my next book. Plus there’s always a load of copy jobs to keep me grafting.

Can you describe the last photograph you took?

My partner Ruth holding my best friend’s new born, Josie. We visited yesterday to meet her for the first time. She’s very small and very cute.

What piece of advice really changed you as a writer?

What was the last thing you wrote that had nothing to do with your job?

Jeez. That’s hard and took me longer to think about that you would imagine. But I got it eventually: a birthday card for my Granddad.

What’s your favourite quote about the process of writing?

I’ll go with a quote from one of my old mentors, Mark Ford: “All great ideas are simple.” I think that’s useful to think about when writing.

Who is your favourite Mad Man – or Woman?

I never actually finished watching it all, but I liked Peggy. She seemed more real.

Can you name your favourite film – and tell us why you love it?

Apocalypse Now, because it’s all kinds of insane.

Which book or books is/are by your bed today?

Notes from the Fog by Ben Marcus and Man’s Search for Meaning by Viktor Frankl.

Who was or is your greatest teacher?

Who is your favourite artist?

Where do you like to work best – is it at a desk, in an office or in a coffee shop? And would you send us a picture of where the magic happens?

I work at home in the mornings and sometimes in a coffee shop in the afternoon.

And finally, where can this caffeine-fuelled audience find you?

In person, in a pub on the east coast of England usually.

And you can find me writing stuff at allgoodcopy.com or theglennfisher.com.

And in book form on Amazon under The Art of the Click: https://amzn.to/2DTIhaJ

Katherine Wildman is a copywriter for creative agencies and multinational brands – and the Creative Director of Haydn Grey.

“Life – being – is the greatest of all art forms.” John Hegarty

Way back in 2011, Sir John Hegarty visited Tyneside Cinema. A random Google search this evening has revealed a selection of gems from that day…

What was happening in your life that brought you to the Copywriting Conference this year? 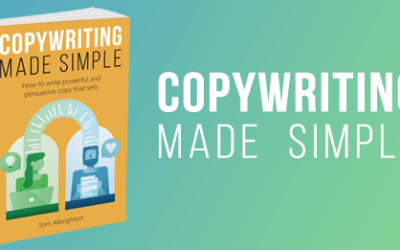 Five things that even seasoned copywriters might not know

I asked Tom Albrighton, author of Copywriting Made Simple, for five fabulous factoids from his brilliant book. He shares them here…