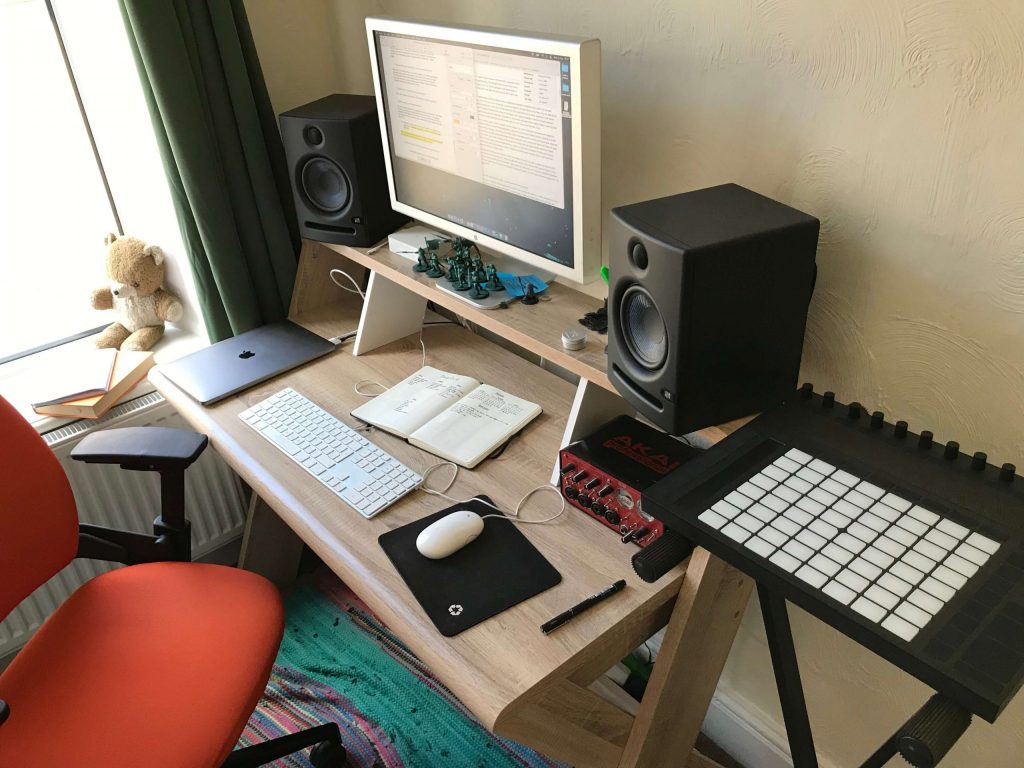 I weirdly don’t read a lot of fiction. I’m more likely to be pouring over a doorstep sized history book.

Thank you so much for agreeing to be a part of The Writing Desk Blog.

Now, imagine I’m about to introduce you to an auditorium, filled with the smiling faces of folks fuelled by caffeine and an eagerness to learn. What would I say?

Here’s the part where we’d sit down and try and look comfortable next to the microphones. Are you sitting comfortably? Then let’s begin…

“Everyone has a book in them…” Or so the saying goes. What do you think/know/believe is the secret to good writing?

Is it a bit too obvious to say personality? It’s something I pretty much had drummed out of me writing museum text. Tone of voice is very important and in many museums this is often a bit stuffy. This is counter to the way I naturally write. Going freelance I quickly learned that my personality was actually one of my biggest selling points. With my longer form writing, it was my personality that I think commissioners responded to. So, yeah, where you can, be yourself.

If you were just starting out, what advice would you give yourself? Which book or books would you read first?

I tell myself to not stay in one place too long until you’re where you want to be. I stayed in one place a little too long, and not that I really regret it because I had a great time, I was just a little comfortable. I wish I’d pushed myself a little earlier.

Silence? Radio? Or music while you work?

Generally silence. I’m dyslexic and I find lyrics in particular very distracting if I’m doing anything creative. If I’m doing donkey work, admin or emailing I like a bit of low-fi techno to get lost in.

What are your top three novels of all time – and why?

I weirdly don’t read a lot of fiction. As a matter of course, I’m much more likely to be pouring over a doorstep sized history book. My partner thinks I’m a bit weird in that respect.

If I was pushed, I think the most important novel I ever read was Brian Jacques’ Redwall. I can’t really remember much about the plot but I do remember the descriptions of the great feast days. Jacques was so great at making food sound amazing and reading his words, it felt like you were sitting down at the table with him.

That’s not the reason I picked it though. I’d never really had a great relationship with reading as a young kid and didn’t really identify as someone who did that kind of thing. I remember getting the book and being utterly intimidated by the size of it. When I finally plucked up the courage to give it ago, I was so immediately and utterly absorbed that I finished the whole thing in about three days. I remember the pride I felt when I finished the story and it’s from then on that I identified as someone who read books.

What’s the best thing you’ve ever written? Why did it rock your world?

I don’t know that it was necessarily the best thing I‘ve ever written but writing my first big exhibition felt like a big deal. I’ve definitely written wittier things that I’ve had more fun with but as a body of work, that lots of people read, it was something that I’m really proud of. It was tough going but to see it there in black and white was an amazing feeling.

What’s the last thing you bought? And yes, that packet of chewing gum counts.

Sitting in a quiet bar in West Yorkshire as they call last orders, it’s a pint of beer that I’m trying to cram in before they kick me out.

Who was your teenage crush?

It was Sonya Madon from Echobelly. I was a bit of an indie kid in the 90s and there was just something about her smokey vocals that kinda did it for me.

Can you describe the best meal you’ve ever eaten?

It was a really simple mushroom carbonara from a little Italian place in Essaouira. The guy who owned the place had come over in the 60s and just never left. It was nothing special, just everything about it was done well and simply. At the time, off the back of eating nothing but tajine twice a day (the curse of being a vegetarian in Morocco), it was an absolute godsend. I almost cried when it came.

What’s your favourite tipple? Is it wine, beer – a cask-aged malt?

I’m rather predictable in my appreciation for a regulation hipster IPAs but I’ve recently got into Torito de Cacahuate (milky peanut butter cocktails) after a pretty hazy few days drinking them last Christmas.

If I were to give you a private jet, David Attenborough as a tour guide and a month off work – all expenses paid – where would you go and what or who would you write about – and why?

I’d say “David, don’t worry about it mate, you’re 95, you go home and put your feet up – I’ve got this.” I’d then get a refund on my plane ticket and use it to buy my partner and I a train ticket to Tehran via Istanbul. Genuinely, I don’t know what I’d write about and that’s the thrill of it really. I’d love to do a travelogue in the style of Paul Theroux one day.

What’s in your pockets?

My wallet, a mask and a blue post-it note with the words ‘Lebanese red’ written on it.

Pen and ink, pencil and paper or keyboard and screen? What’s your writing style?

It depends what I’m writing. If it’s making notes, I just can’t do it on screen and have to do it the old fashioned way on pen and paper. If it’s anything creative, it’s the other way round and I have to do it on computer. I think it’s all the crossing out and spelling mistakes – it would just be a nightmare.

Do you read any blogs or magazines about writing? (And I mean read, not just subscribe to and delete/leave on your desk and recycle?)

I know I should, but not really. I do read the Writing Desk though.

Tea – or coffee? What’s your poison?

Do you have a favourite cup or mug? Can you describe it?

It’s a tiny little cup I have from when I was a kid. It has a smiling sun peeking out from behind a rainbow with my name written on it.

What was your most adored children’s book? And character?

It was Usborne’s How to Draw Cartoons. I was much more of a doodler than a scribbler as a kid so I loved this series.

Problematic. It feels such a catch all word for expressing all that’s wrong with the world.

Your most loathed word? (You know, the one that makes you shudder and say “Ew!”?)

Problematic. It feels such a catch all word for expressing all that’s wrong with the world.

Where can we find you? – Browsing online or lost in the aisles of a bookstore?

You can find me in the hills, in the valleys and by the sea.

Name the artist who is guaranteed to get you up on the dance floor.

Phew, that’s a hard one. It changes all the time. I’m known for my love of Beyonce so maybe her.

What are you working on today? What’s in the pipeline?

I’m just finishing up some exhibition text and writing up a workshop I did last week. Coming up, I’ve got a sound installation to produce in Scotland and a text writing gig to plan.

Can you describe the last photograph you took?

It was pretty boring. Our bath has a leak but we can’t get one of the screws loose on the side. Our landlord is coming round with an electric screwdriver and asked to take a picture of the offending fixture so he knows which end to bring.

What piece of advice really changed you as a writer?

Murder your darlings! My writing is full of the little blighters and no matter how much I love them, it’s always better when they’re dead and buried.

What was the last thing you wrote that had nothing to do with your job?

An email to my solicitor. We’re buying a house, and jeez, it’s a pain in the arse…

What’s your favourite quote about the process of writing?

‘Big ideas come from the unconscious. This is true in art, in science and in advertising. But your unconscious has to be well informed or your idea will be irrelevant. Stuff your conscious mind with information, then unhook your rational thought process. You can help this process by going for a long walk, or taking a hot bath, or drinking half a pint of claret. Suddenly, if the telephone line from your unconscious is open, a big idea wells up within you.’ – David Ogilvy.

Can you name your favourite film – and tell us why you love it?

Star Trek II: The Wrath of Khan. It is just the greatest. It’s objectionably bloody crap and I’m not sure it’s aged well but it has such a fond place in my heart. The final climactic scene where Spock gives up his life for the crew of the Enterprise. My god, it’s almost Shakespearian. William Shatner and Ricardo Montalban just chew up every scene, I love it.

Which book or books is/are by your bed today?

The British Museum by Dan Hicks. MC Hammer is a big fan apparently.

Who was or is your greatest teacher?

He was my history teacher, Mr Featonby. He was the only teacher I ever came across that could hold an entire class in total and utter fear – he would go apoplectic at the slightest transgression – but wow, could he tell a story. It was listening to him and learning about what history is that inspired me to do what I do.

Where do you like to work best – is it at a desk, in an office or in a coffee shop? And would you send us a picture of where the magic happens?

Very occasionally (such as today) I like to get out into the wild but generally, I’m happiest in my little box room surrounded by my stuff.

And finally, where can this caffeine-fuelled audience find you?

You can find me at @hellojamie_t or via my website www.hellojamietaylor.com

Katherine Wildman is a copywriter for creative agencies and multinational brands – and the Creative Director of Haydn Grey. 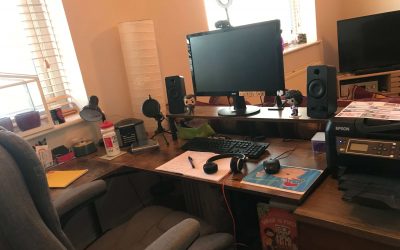 Favourite quote: “Know safely what the rules are, and then break them with joy” Neil Gaiman 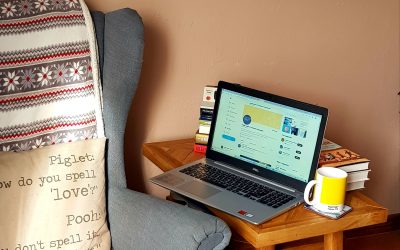 Favourite quote: If you can’t explain it simply, you don’t understand it well enough.

I hate overwriting. Take out any unnecessary words. It’s all about making the complex simple rather than vice versa.